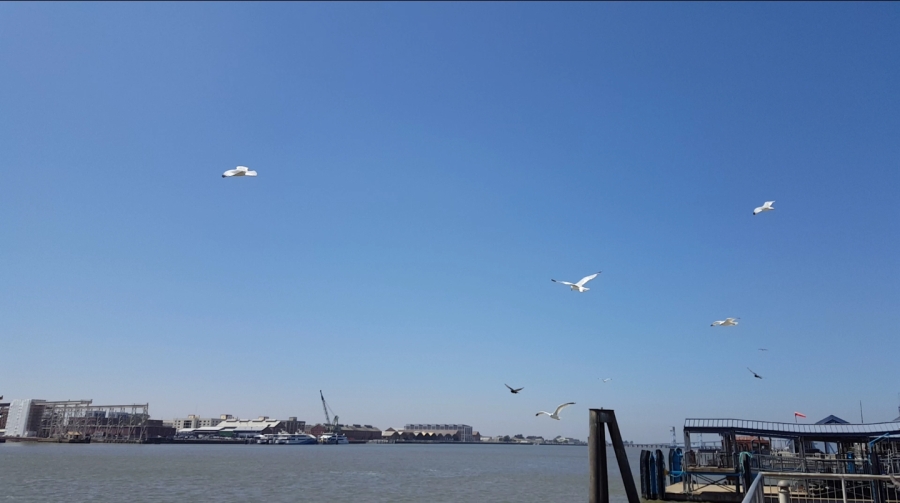 Last Thursday, with my cell phone in hand, I set out to my favorite spot in Vallejo, California, tasked with creating a video.

Ok, “tasked” may be overstating it. But in my quest for a job, when a potential employer heavily implies that I should make a new video prior to our official interview so that he can check out my skills…well, I wouldn’t be a great job candidate if I ignored that giant hint, right?

Problem? I had no idea what to create.

There was no prompt, no purpose, no directive other than “make a video.” The student inside of me was begging for more structure. A book to base it on? A movie? A political cartoon? Anything would have been better than ULTIMATE FREEDOM. So I decided on my go-to method of content creation when I’m stuck: get as much as possible and see what stands out during editing.

Michael and I were going to San Francisco to get his visa for his trip, so I figured the day trip to the Bay and back was going to be my best opportunity to get some footage. While the Bay Bridge proved to be as beautiful as ever, the trip into the city proper was a bust–I drove around in a square three times while Michael made the quick trip into the consulate.

After three hours to get to San Francisco, we couldn’t go home after just 30 minutes. Plus, it was a beautiful day away from the oppressive smoke we had been living in And, most importantly, I didn’t have any footage. Michael suggested Vallejo, knowing that I had a soft spot for the waterfront in my former home.

Visiting the Mare Island waterfront always centers me. I spent a lot of time there in the four years I lived in Vallejo: from grading papers at the coffee shop to going on walks with friends, that was the place I was always drawn to. When we got there, the sea breeze hit my face, and I felt at home. Scenes started running through my head; while I didn’t know what I was going to do with my footage, I at least had an idea of what I wanted to capture.

When it came to editing, I let the footage guide me and ended up with a quasi-love letter to the waterfront:

When it was all done, I came away with a few lessons for future videos:

Storyboard, outline, plan ahead: Think of your story first!

I wish I had had a clearer idea of what I wanted to create when I went out that day. It would have made filming easier because I would have had a better idea of where I wanted and needed to go and the shots I needed. Without a story in mind, I was just moving like a butterfly and going where the wind took me. The end result wasn’t bad, but I’m sure it could have been better…or at least better structured.

I shot footage of the Bay Bridge, of trees, pan shots, and stills. I filmed the kites from far away, from close up, and from below. I wish I had gotten more shots of the trees swaying in the breeze and different shots of the water lapping against the dock. More footage is always better than less footage, and especially if you’re in a position like I was, having more footage can take projects in a different direction.

Know your gear well and check your footage

I mean, this should be a no-brainer, but I felt like such a bonehead when I got home and discovered that some of what I thought was footage was actually just a couple of photos from when I “started” and “ended” the video. It was bright, I had my sunglasses on, and I could barely see the screen on my phone, but, oh, how I wish I had gotten the shot I was trying to get. It was so much better than the shot that ended up in my video, but not getting it was my fault. I should have checked before I left. I also should have practiced more with my phone; filming everything in landscape changes where the video button is and is less intuitive. I’d like to say that I only accidentally took photos when I meant video once, but that’d be a lie. Lesson learned.

Overall, I enjoyed the process of putting the video together, regardless of the outcome of my job interview. I watched some tutorials to make my footage look better through color correction, bemoaned the lack of Final Cut Pro like I had in the past but made do with iMovie, and explored Freesound to improve the overall quality. Putting all the puzzle pieces together was more fun than I remembered it being.

I loved the wind through the trees, but I didn’t think the up-into-the-sky shot fit into my final video. For some reason, though, what came to mind when I reviewed it was not the bright, warm, summer day I had experienced, but a dark horror scene. So I darkened it, slowed it down, overlayed moody wind sounds, and…actually love the short clip. I kind of imagined it as a scene in a horror film. I also played with turning it into a melodramatic PSA warning about the danger of trees: “May cause illness, blindness, and death.” I’ll have to come back to this clip again in the future.

Have any tips for making better videos? Suggestions for open-source resources for budding filmmakers? Comment below!

One thought on “Concrete Against Sky: Lessons in Video Creation Through Missteps and Mistakes”